Why would you say some dumb shit like this to a 9-year old? Much less a Black 9-year old:

The mother of a black Queens girl yesterday pressed for the transfer of a white PS 35 teacher who made a racial “joke” about the gorilla pictured on the girl’s folder.

Rachelle Hogans-Blair said the city’s Education Department did not go far enough in disciplining fourth-grade teacher Gail Kaplan at the Hollis school for remarking to 9-year-old Cheyenne Griffin, “You took a picture of your family and put it on the front of your folder.” The incident happened Oct. 17 during a spelling test, the girl’s mother said.

Kaplan also told the girl not to tell her parents, who sensed that something was wrong when their daughter, usually bubbling to talk about her school day and phone friends, went straight to her room after school and was quiet the entire weekend, the mother said.

Even if she didn’t mean to make a racially charged statement as she claims, how are you gonna clown a little kid in front of the whole class? And all the teacher got was a slap on the wrist. Simply amazing…

Madison is predicting that reggae (dancehall) is on the rise. I’d love to see it happen but I feel a sense of déjà vu. Didn’t we go through this about 10-15 years ago (damn I’m getting old) when Shabba Ranks, Buju Banton, Supercat, Cutty Ranks, KRS-ONE, etc. were doing their thing? And let’s not forget Sly & Robbie’s Silent Assassin CD. I just knew dancehall was gonna take over the U.S. but it never happened. Seems like most Americans always get stuck on not being able to understand the lyrics. Nor did those artists, aside from Shabba, ever really get much radio/video play. Will it be different this time? If it is I hope we don’t get some watered down version of dancehall. Keep mine pure & hard core.

Also, in the comments of Madison’s post is a good discussion about the history of hip-hop and how much reggae influenced rap. There’s another prediction in the comments about Garage music being the next, next thing. I’d love to see that too, but I can’t see Americans adopting it widely. Especially not now that we’ve got like 1 1/2 companies running all of the media outlets. They’ll just spoon feed us the same old stale music they’ve been playing.
END_OF_DOCUMENT_TOKEN_TO_BE_REPLACED

These sound like straight-up fighting words to me! You have to give Kobe credit for not backing down from Shaq. Here’s the transcript of Jim Gray’s interview of Kobe:
END_OF_DOCUMENT_TOKEN_TO_BE_REPLACED

A post about Star Trek: Enterprise over at S-Train Canvass reminded me that I’ve been meaning to do this post of the Ferengi’s Rules of Acquisition. Enterprise has gotten better this season but it still can’t compete with Deep Space 9 (DS9) or The Next Generation. The best things about DS9 were that Avery Brooks was running things, and the Ferengi & their Rules of Acquisition, which governed their planet. The Ferengi were all about profit, and me being a trader… well, let’s just say that I could relate. They would reveal some of the rules throughout the series, which usually provided great comic relief. At some point I decided to write them down, adding to a list I found on some old message board. Here’s my relatively complete list with some of my favorites in bold:
END_OF_DOCUMENT_TOKEN_TO_BE_REPLACED

Looks like the Lakers may be unravelling already. Shaq wasn’t too happy with Kobe’s play the other day and let it be known:

O’Neal and Bryant seemed to be interacting comfortably Sunday on the practice floor, sharing the ball freely during an afternoon workout. Then they traded nasty verbal jabs after the session — arguably their harshest comments since L.A.’s second championship season — all stemming from O’Neal’s suggestion Friday night in Las Vegas that Bryant “should probably look to be more of a passer until he gets his legs strong.”

Bryant, recovering from offseason knee and shoulder surgeries, didn’t welcome the suggestion, saying: “I definitely don’t need advice on how to play my game.”

Not even advice from O’Neal?

When apprised of Bryant’s reaction, O’Neal lashed out harder.

That was a reference to Bryant’s plan to exercise an option in his contract at season’s end and test the free-agent market next summer, a stance Bryant has said he won’t change in the wake of his felony sexual assault charge in Colorado.

Asked to clarify his “my team” remark, O’Neal added: “Everybody knows that. You [media] guys may give it to [Bryant] like you’ve given him everything else his whole lifetime, but this is the Diesel’s ship. So … if you ain’t right [physically], don’t be trying to go out there and get right on our expense. Use the people out there, then when you get right you [can] do what you do.”

Throughout this first month back to work, however, there have been thinly veiled hints from O’Neal that problems have resurfaced, starting from the veterans’ first day of training camp in Hawaii. Bryant did not fly on the Lakers’ team charter and reported to camp a day late. O’Neal said at the time that “the full team is here,” leading some to speculate that he preferred to play this season without the distractions attached to Bryant’s court case.

Days later, explaining why he was sitting out an exhibition game with a sore left heel, O’Neal said: “I want to be right [in the regular season] for Derek, Karl and Gary.” He was referring to Derek Fisher and new teammates Karl Malone and Gary Payton — and O’Neal ommitted Bryant’s name from the conversation more than once.

Malone and Payton, by contrast, have publicly supported Bryant as strongly as anyone in Lakers circles. But even Payton has urged Bryant to ease his way back into the team flow, after Bryant fatigued quickly and shot poorly in the second half of the Lakers’ final two exhibition games.

Said O’Neal: “Just ask Karl and Gary why they came here. One person, not two. One. Period. … I’m not telling [Bryant] how to play his position. I’m telling him how to play team ball.”

I was real surprised the other day to hear Kobe say he was still going to exercise his option. I think he’s in a bit of denial. His stock is not nearly as high as it once was. I think he’d be better off sticking with the Lakers for a couple more years. Anyway, this sure adds a lot more drama to the Laker’s season.

Heads up ATL crew! There are some great concerts jumping off the next week or so. I’d love to hit them all but I’ll likely have to miss some of the ones I want to see. Unless I find a hook-up. 🙂 At the top of my list are:

The Meshell show is a can’t miss.

The Believer Magazine has an excellent interview with Ahmir ‘?uestlove’ Thompson of the Roots. If you’re a hip-hop fan I highly recommend it. Read it to find out:

Speaking of Roy Ayers (from several days ago), BET Jazz is showing an old concert of his as I type on their Classic Concerts show. It appears that the same episode will be airing a few more times over the next couple of days, so you may still be able to catch it. Don’t hold me to that because BET doesn’t provide detailed guide data for many of their shows. My TiVo and I hate that about BET!

I thought I’d post some pics of my nephew getting his first driving lesson and/or trying to steal my car. 🙂 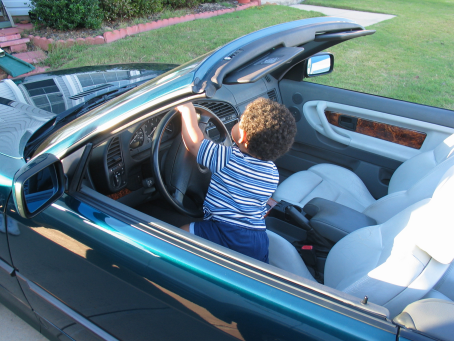 END_OF_DOCUMENT_TOKEN_TO_BE_REPLACED

These smart phone announcements just keep coming. Sony Ericsson has just announced its P900 phone. This is one serious device:

Still based on Symbian OS 7.0 which powers the UIQ platform of the device, the P900 shares many of the traits of the P800 such as a clamshell flip cover design, an integrated digital camera with VGA resolution and tri-band GSM/GPRS 900/1800/1900 MHz connectivity. In addition, the P900 is also capable of recording video at QCIF resolution with MPEG4 video compression, and video clips should consume approximately 1 MB of storage per minute according to Sony Ericsson.

The screen of the P900 boasts improved colour depth, and is capable of displaying 65,536 colours compared to 4,096 colours on the P800. Improvements to software also enable full and wide screen viewing of images, and with support for both J2ME and the Mophun gaming platform, will be able to access a variety of application and games content. The much praised 5-way Jog Dial from the P800 remains unchanged, as do polyphonic ringtones and processing power sufficient to enable 3D gaming (of which one is bundled with the P900).

Sounds pretty impressive but I’m still not swayed from getting a Treo 600… yet.